In 2015 I came across the Lane Cove Literary Awards; a national award based within the Lane Cove Library, Lane Cove, New South Wales (NSW). In it’s second year running, the contest included three categories; Short Story, Theatre Script and Poetry. There was also an additional three sub categories; Lane Cove Resident, Senior Prize and Youth prize. The contest was made attractive by it’s no fee entry as well as it’s generous $6500 prize pool. That year I haphazardly entered a poem and selected the Youth Prize sub category along with my submission. Months passed and I hadn’t heard from the Lane Cove Library Stuff. I wasn’t expecting to but ofcourse I hoped. Shortly before the date of the Award Ceremony, Shortlists were released and my name was no where to be seen.

In 2016 I received an email announcing that the Lane Cove Literary Awards were now open and that entries were being accepted. When I first started submitting my work to contests and publishers I promised my self that I would persevere through rejections and deny any sense of defeat. In 2016 the Theatre Script category was replaced by a Travel Story one. That year I entered submissions into all three categories as well as their Youth Prize Subcategory.

“Congratulations on being included in the Shortlist for the Lane Cove Literary Awards 2016 Market Square Youth Prize.”

This was the introduction of an email I received from a Lane Cove Library staff member a few months later. I read it. I reread it. My eyes kept latching onto “congratulations” and “Shortlist”. I had never been shortlisted for a prize before, I had never received an email that opened with congratulations before, my travel story was Shortlisted for the Lane Cove Literary Awards Market Square Youth Prize and my chest was introduced to a positive feeling of overwhelm that it struggled to contain. I did not go on to winning the prize however I was to be published in the 2016 Lane Cove Literary Awards Anthology and invited to the ceremony to receive an award. A milestone in the life of a writer who questions themselves about whether they are worthy of the title or not. I was worthy. I am a writer.

This year when I received an email in June, announcing the reopening of the Lane Cove Literary Awards, I knew I had to enter. Not because it was comfortable and safe and had previously established me as a writer but because I had more to give, I could do better. In 2017 the Travel Story category was replaced with a memoir category and two additional subcategories were introduced. The only subcategory I was eligible to enter was the Youth Category as the rest were residential and I lived in another state, Queensland. I entered a submission into the Memoir category as well as the Poetry category. 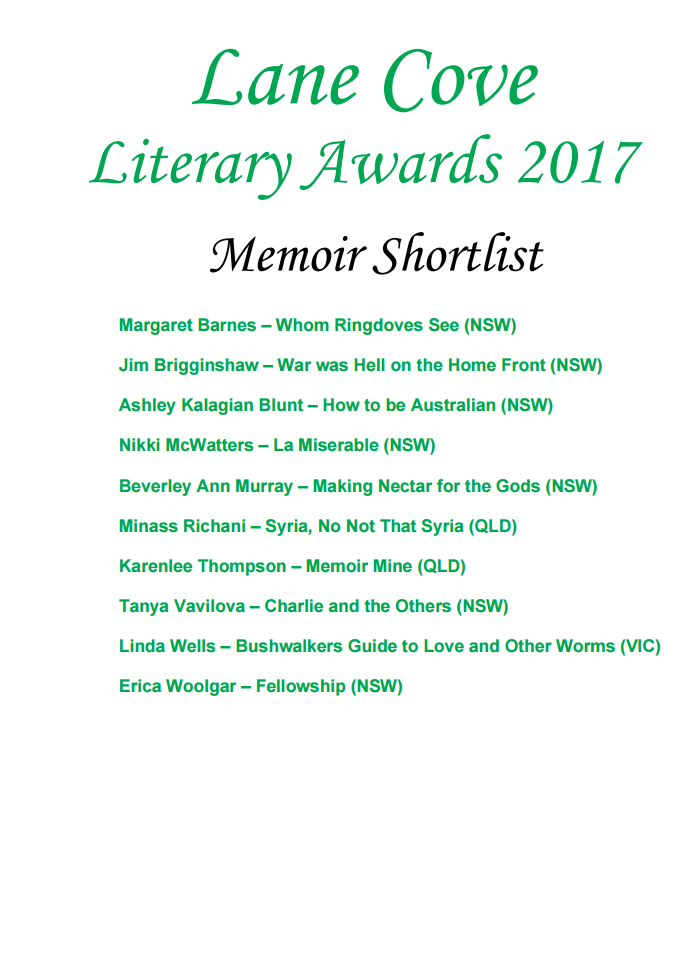 I’m so thankful to have reached this point in the awards and to be included on the Shortlists amongst other talented artists. It would be wonderful, an honour to hold a winning award but right now I’m excited to travel back to Lane Cove for the 2017 Award Ceremony.

View all posts by minneyrichani

This site uses Akismet to reduce spam. Learn how your comment data is processed.